Corruption Of The Information Super Highway 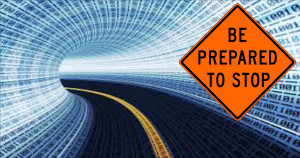 Happy New Year Everyone………..
Be Prepared To Stop
As an avid user and contributor to the growth of the internet I have seen a very scary change to the information we the public regardless of  race, personal beliefs or political affiliations are being exposed to by powerful people with agendas to serve.

Even long time goto information sites we have come to trust about controversial topics have now become skewed and politically corrupted. In this 2016 campaign year with the country so divided on issues we all want to check facts about claims made by any side of a situation. Unfortunately for current news items this can be next to impossible unless you are actually witness to the event. However for historical fact checking we may all want to go Old School for our information. I know that everyone from my generation has at least been exposed to the use of printed media such as books, encyclopedias, news papers (probably the least reliable), magazines ect. You will have to dig out a box in your parents basement or perhaps find a small local library with the microfilm original copies of archived print media. The internet is no longer the place for research it has now been corrupted and indexed with so much misinformation that we really need to Be Prepared To Stop check the facts and educate one another responsibly before posting propaganda.

Share this page on your social media and Mark Zuckerberg, Bill Gates and Steve Jobs will pitch in to buy you a magical unicorn that you can predict the future with….

Had to throw that in as an example!

I can not guarantee that all pre-internet printed material is not politically slanted at times but certainly can say when it came to the publication of these items most had to under go much more reasonable scrutiny before reaching print **with the exception of newspapers that have been from the beginning vulnerable to political influence.

**Remember the movie Mr. Smith Goes to Washington is a 1939 American political comedy-drama film, starring James Stewart great movie I recommend it for your watch list. We could use some Mr Smith’s nowadays!

I have found on the internet document scans and digitized printed archives many times altered to serve a purpose of misinforming so find originals.

As the old saying goes The Truth Will Set You Free in this day and age perhaps it is the Truth that will keep you free.. The alternative may be to awful to contemplate.

Be Good, Be Informed and God Bless America!