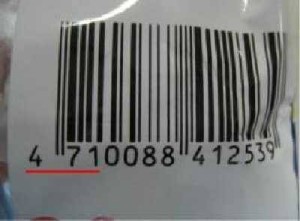 In the wake of 2008 product scares involving melamine-tainted pet foods, lead-tainted toys, and melamine-tainted milk products, all originating in China, consumers in the U.S. understandably became more apprehensive about the places of origin of the products they were purchasing. However, many found themselves frustrated in their efforts to be more selective buyers because

The posts being shared on social media is a reflection of those fears, a message that provides simple, helpful instructions for determining the country of origin of any product. According to this tip, a glance at the first three digits of a product’s bar code will tell you where it was made.

Unfortunately, determination of product origins for American consumers isn’t quite as cut and dried as it’s been made to sound here. First of all, the two- or three-digit country codes referenced above are incorporated into the European Article Number (EAN-13) bar code standard, but not into the UPC-A bar code which is most commonly used in the U.S. Moreover, what those EAN-13 country codes indicate is the country or economic region where a particular bar code was assigned, not necessarily the country where the product identified by that bar code was made:

Q: Does the EAN number indicate the country of origin of a product?

A: No it doesn’t. The 3-digit prefix code indicates which numbering organization has allocated the bank of numbers to the company. For example, a company may have its headquarters in South Africa. The EAN organization in South Africa has the code “600,” but all the products of the company may be manufactured in England. The English-made products would still have the “600” prefix code. The prefix code is a way to have 70-plus EAN member organizations issuing numbers without having to worry about duplicate numbers.

In determining the country of origin of a product sold in the U.S., consumers often still have to rely on the standard methof of looking for “Made in [country name]” labels on the packaging.