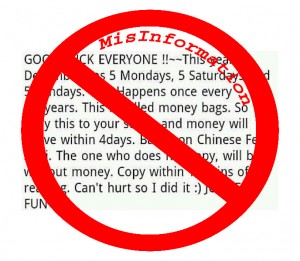 It is perfectly true that December 2012 has 5 Saturdays, 5 Sundays and 5 Mondays. However, such a combination occurs far more often than every 823 years. The last occurrence was in December 2007 while the next occurrence will take place in December [ad name=”G-Rectangle-right”]2018. In fact, any month that has 31 days will have three consecutive days that occur five times in the month. Such combinations are commonplace and occur each and every year. This message is a revamped version of earlier – and equally spurious – chain messages.