County Sheriffs Department Warning If You Find a Child Crying 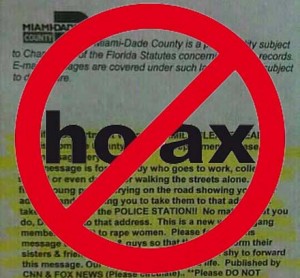 According to this widely circulated message, which purports to be from the “County Sheriffs Department”, women need to be very wary if they find a child crying beside the road who provides an address and asks to be taken home. The message claims that, instead of going to the child’s home as they believe they are, the women will instead end up at the gang’s premises, where they will be set upon and raped. The warning advises women to take the child to a police station rather than the address they have been given. It exhorts recipients to pass on the warning to as many people as possible and claims that the story has been published on CNN and Fox News. The story, which has been circulating in various incarnations since at least 2005, travels via email, social media posts and phone text messages. This version names the MS-13 (Mara Salvatrucha) gang as the one responsible for the supposed attacks. Other versions do not specify a particular gang and claim that the attacks are part of an initiation process for new members.

[ad name=”G-Rectangle-right”]However, extensive research reveals no credible evidence whatsoever that supports the claims in the warning message. Despite the claim that the warning was aired on CNN and Fox News, there are no such reports on those news outlets. In fact, there are no reports about crimes that use such a modus operandi in any credible news publications.

Moreover, the claim that the warning originated with a police or Sheriff’s department have been repeatedly denied by various law enforcement agencies. There are several versions of the warning circulating some of which name specific police departments in various US states and elsewhere in the world as well.

However, the bottom line is that the widespread and planned campaign of rape warned of in this message is simply not happening. Thus, sending on this warning will achieve nothing other than to spread unnecessary fear and alarm among communities and potentially distract recipients from watching out for much more credible threats.