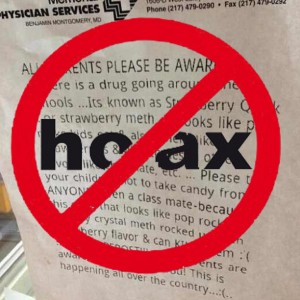 DEA concludes flavored meth does Not Exist
10/31/08 – According to DEA public affairs officer Barbara Wetherell, the agency has found no evidence to substantiate that Strawberry Quick or any other form of flavored methamphetamine exists. “This is an urban myth,” she told ColumbusLocalNews.com in a story published Oct. 31, 2008. “We surveyed all of our offices yesterday (Oct. 30) and we found nothing. This is just one of those emails.”

In March 2007, the U.S. Drug Enforcement Administration announced it had received reports of drug traffickers offering candy-flavored methamphetamine for sale in western and midwestern states from California to Minnesota in the form of colorful crystals resembling Pop Rocks.

[ad name=”G-Rectangle-right”]The first such report had been issued three months earlier by the Nevada Department of Public Safety after samples of what narcotics agents believed to be strawberry-flavored meth — nicknamed “Strawberry Quick” — were confiscated in a drug raid. State officials speculated that illegal drug manufacturers were experimentally reformulating crystal meth by adding strawberry and other sweet flavorings to make the bitter-tasting, highly addictive stimulant more attractive to potential teenage customers.

After several months of following up on these reports, however, DEA officials told reporters they “hadn’t seen much” in the way of actual seizures of flavored methamphetamine and that the DEA itself had yet to seize or analyze any of the stuff at all.

As of June 2007, experts were speculating that local drug enforcement agencies may have confused samples of colored meth — which is quite common and accounted for by dyes present in the raw ingredients — for what they took to be a new, flavored variety of the drug.

Jeanne Cox, executive director of the Meth Project Foundation, summarized the quandary in a statement to the drug policy website JoinTogether.org: “We are all still trying to figure out what’s going on with strawberry meth and if it really exists.”

Meanwhile, the waters were further muddied by reports that drug dealers in California had begun marketing new, strawberry- and coconut-flavored varieties of cocaine. In July 2008 the DEA confirmed receiving samples of pink- and off-white-tinted cocaine (not methamphetamine) with a “generic, sweet, fruity odor.”

“Although flavored ‘hard’ drugs (notably ‘strawberry meth’) have received extensive press in the mass media,” the July 2008 report went on to say, “to date very few such exhibits have been submitted to the DEA Laboratories.”