Calling #77 or 112 on your Cell Phone will Summon Police 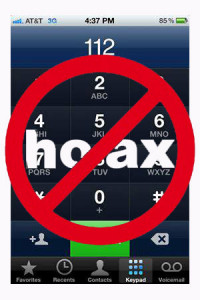 In a few states calling #77 on a cell phone will immediately connect you to that state’s highway patrol, that code is far from universal. Some states use #77, but others use *55, *47, *77 or *HP, and some don’t have any special code at all. Rather than frantically try to figure out which one will work in the area you’re in, police generally recommend that the best approach is to get around the problem by trying 911 first:

The phone number 112 is used as a global emergency phone number in a number of countries, primarily in the European Union. In some parts of the United States a call to 112 will roll over to the local 911 system, but since 112 is not implemented as a universal emergency number in the U.S., calling 911 directly is the better option.

[ad name=”G-Rectangle-right”]This is an actual true story and not one of those Internet stories that are passed on and on. This actually happened to one of my dearest nw friend’s daughter. Her daughter, Lauren, is 19 yrs. old and a sophomore in college. This happened to her over the Christmas/New Year’s holiday break.

It was the Saturday before New Year’s and it was about 1 pm in the afternoon. Lauren was driving from here (Winchester, Va.) to visit a friend in Warrenton. For those of you who are familiar with the area, she was taking Rt. 50 East towards Middleburg and then was going to cut over to I-66 via Rt. 17. Those of you who aren’t familiar with this area, Rt. 50 East is a main road (55 mph and two lanes each side with a big median separating East/West lanes), but is somewhat secluded, known for it’s big horse farms and beautiful country estates.

Lauren was actually following behind a state police car shortly after she left Winchester and was going just over 65 mph since she was following behind him. An UNMARKED police car pulled up behind her and put his lights on. My friend and her husband have 4 children (high school and college age) and have always told them never to pull over for an unmarked car on the side of the road, but rather wait until they get to a gas station, etc. So Lauren actually listened to her parents advice, and promptly called #77 on her cell phone to tell the dispatcher that she would not pull over right away.

She proceeded to tell the dispatcher that there were 2 police cars, one unmarked behind her and one marked in front of her. The dispatcher checked to confirm that there were 2 police cars where she was. There wasn’t and she was connected to the policeman in front of her. He told her to keep driving, remain calm and that he had back-up already on the way.

Ten minutes later, 4 police cars surrounded her and the unmarked car behind her. One policeman went to her side and the others surrounded the car behind. They pulled the guy from the car and tackled him to the ground … the man was a convicted rapist and wanted for other crimes. Thank God Lauren listened to her parents! She was shaken up, but fine.

I never knew that bit of advice, but especially for a woman alone in a car, you should NEVER pull over for an unmarked car in a secluded area. In fact, even a marked car after dark should follow you to a populated area. Apparently police have to respect your right to keep going to a “safe” place. You obviously need to make some signals that you acknowledge them (i.e. put on your hazard lights) or call #77 like Lauren did.

I am so thankful that my friend was sitting at our book club meeting telling us this scary story, rather than us at her house consoling her had something tragic occurred!